The Ampex Electric Company of Redwood City, Ca was the premiere manufacturer of tape recording equipment going back to the days following WWII. The founder of Ampex had been in the military and had discovered the German development of tape recording toward the end of the war. He brought back to the US the technology and started Ampex with the financial help of entertainer Bing Crosby.(4)

Ampex was known for its large excellent quality console-type tape machines that transformed the radio and recording industries in a huge way in the late 40s and early 50s. Around the mid-50s, Ampex brought out the first really high quality relatively small portable recorder…the model 600. (1,2)
This machine became a mainstay for the radio industry for recording on-the-scene type programs as well as all around studio use. For one thing this new model was much lower in price than the big console-type units…and it easily fit in tight radio control rooms.

When I worked at KYOS in Merced, over 50 years ago, an Ampex 600 was the main production machine. In fact I did the audition for that job on that very machine. The manager sat my down in the room that served as the production studio, handed me a script, turned on the machine and said: “Show me what you can do”! Well I passed the audition and started my first job in radio as a full time announcer-operator. When I first came to KHSL in Chico, in the early 60s, they also used an Ampex 600 in their production studio.

Ampex promoted the model 600 as an ideal model for radio stations. They were going up against their main competition…the relatively small Magnecorder PT6 machines that many radio stations used at the time. This machine ran at the single speed of 71/2 inches per second using a maximum of 7 inch size reels. Ampex claimed a response of from 40 to 15,000 cycles per second. They said it weighed less than 28 pounds…which sounds a little heavy for a “portable”! The 600 was a great machine in its day and was used in small and large stations.(3)

I remember watching the farm reporter and his engineer for KNX in Los Angeles using an Ampex 600 to record interviews at the San Fernando Valley Fair in the mid-50s. I know it’s hard to believe that an LA station did farm reporting! Los Angeles County was a big farming area in those days.

I remember that the 600 was an easy machine to thread…you could wrap the tape around the heads with one hand! The controls were simple and fast operating. It was ruggedly built and could stand up to rough and tumble use…especially in field recording.(5)

The Ampex 600 was one of mainstays of quality recording and playback for several years and still remembered fondly by many of us who served in the industry in that bygone era. 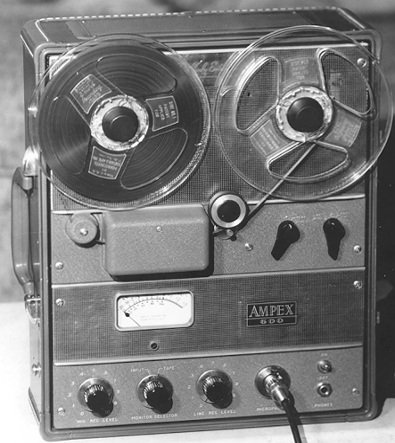