The Microphone Man is back with another look at Electro Voice (EV)…this time their revolutionary dynamic cardioids they called “Variable D”units. After EV had success with their “Slim Trim” omni mikes, as we covered in Microphone Man # 13, they went on to develop an excellent series of single-element dynamic cardioid mikes that were unlike any others before them.

Electro Voice “Variable-D” (D for distance) principle utilized multiple rear sound entrance points that varied the distance differing audio frequencies had to travel before reaching the rear of the diaphragm.

This method of producing the cardioid or heart-shaped unidirectional pickup pattern enabled the mike to be used close up without the usual “boomy”, bass-boosting proximity effect of most cardioid mikes. These mikes had a very clean, crisp sound, especially on the human voice.

EV used this new acoustic principle in three mikes that they offered in the mid-50s. The top of the line unit was the model 666 broadcast dynamic cardioid. This mike caught the eyes and ears of many top broadcast engineers and was used by CBS, ABC and other major broadcasters of that era. WABC radio in New York had a model 666 in its announce booth when they started their very successful top-40 format that began in Dec.1960. [2A,2B,2C, [ 2D Advertiment ] During this period WABC had the largest audience of any radio station in the country. Check out their website at: WABC Musicradio 77.

In addition to the model 666 EV also produced two less expensive versions…the 665 [3] which was designed for broadcasting and the model 664 [4A,4B] which was made for public address sound system use. The 665 had a very smooth frequency response very similar to the 666 whereas the 664 had a more peaked high frequency response and less bass. All three mikes were high quality, rugged units and many thousands were sold. Many smaller market radio stations used the 664 because of its lower cost. Local stations using the model 664 in the 60s were KTRB and KFIV.

In the early 60s EV came out with new models using this same Variable-D principle but in much smaller size bodies. These newer versions, the models RE-15 and RE-16 [5A, 5B] were well used by big and small stations and networks for many years. EV still produced the original versions clear up into the late 60s along with these newer units.

Then in the late 60s, EV brought out the model 668 [6] which had an improved “Continuously-variable-D” design that was larger and incorporated a large foam windscreen around the unit. This mike was specially designed for motion picture and TV overhead booms but also saw use in radio studios.

The model 668 lead to the development of the RE-20 [7] model which became a radio industry standard that is in use to this very day. Disc jockeys loved the RE-20 for its “big” full bodied tone that made voices leap out of the radio speaker! Talk show hosts love the RE-20, too. Electro Voice presented Rush Limbaugh with his own gold plated RE-20 that he calls his “golden EIB microphone”.

Enjoy the pictures of these iconic microphones and the audio sampled from Dr. Stan Coutant of the Coutant microphone site. 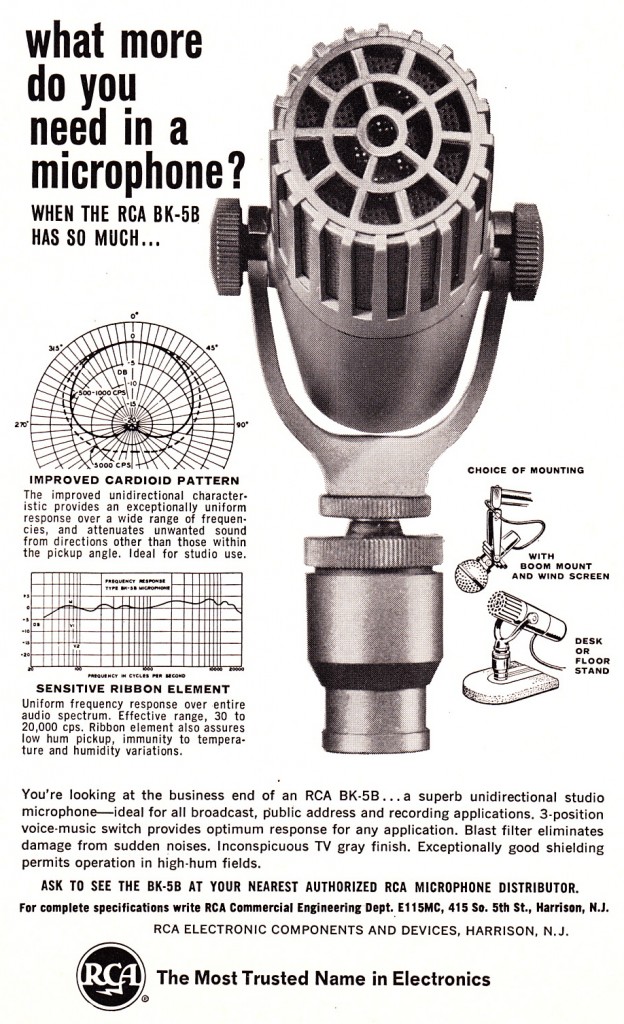 [ 7 ] The current radio broadcast standard for over 30 years…the EV RE-20. This unit employs an even more sophisticated application of the “Continuously Variable-D principle developed for the RE-15.(see PDF file spec sheet).